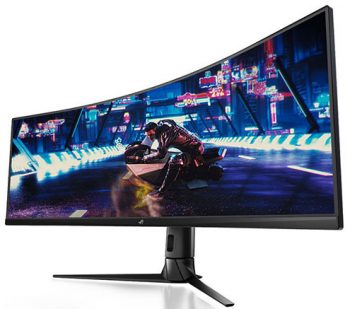 Asus this week showcased a new monitor in their popular ROG Strix gaming lineup. The new ROG Strix XG49VQ is a massive 49″ in size with a double Full HD resolution of 3840 x 1080, 32:9 aspect ratio and 1800R curve. Being aimed at gamers the screen of course supports a high refresh rate, in this case 144Hz. While the screen doesn’t pack the high resolution of some other recently announced 49″ screens like the Dell U4919DW for instance (5120 x 1440, limited to 60Hz though) it does offer that all important higher refresh rate for gaming. Also keep in mind that powering a screen at this lower resolution at 144Hz should be a lot easier on your system than trying to power the higher res.

HDR support is inevitably talked about as with most new screens today but it appears it is only carrying the most basic VESA Display HDR 400 certification. We do know that the screen will offer a wide gamut with 125% sRGB coverage, so we expect ~90% DCI-P3 coverage once the final spec is released. Other than that we would not expect any local dimming support and probably a 400 cd/m2 maximum brightness (update 8/1/19- this has a 450 cd/m2 brightness spec). So there’s probably no real HDR support here.

There is no official product spec page yet so we only know a few bits of information so far, but can take an educated guess at other aspects. We do know that AMD FreeSync 2 is supported and the screen features Asus’ common range of GameVisual preset modes, shadow boost settings and the likes. There is a Picture by Picture mode too given the very large horizontal size of the screen.

Based on the size, refresh rate and resolution we believe the screen will be based on a Samsung VA technology panel. We would expect to see DisplayPort 1.4 and HDMI 2.0 ports offered here and probably a tilt, swivel and height adjustable stand.

More information on specs as we get them. Price and release date is currently now known either.

Update 8/1/19: Thanks to some further information released at this year’s CES event in Las Vegas we now know that this screen is expected to be available towards the end of January. Pricing still unknown.

Update 13/3/19: January release didn’t happen, but we have now been told by Asus that the ASUS ROG Strix XG49VQ Monitor will be available from March 2019 with MSRP of £999.