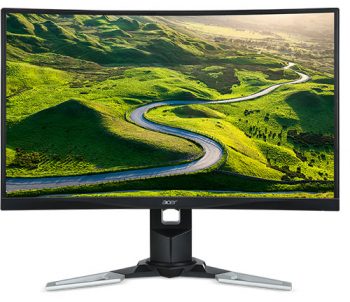 Support for HDR10 is mentioned in the spec, although there is no real HDR performance offered from these displays, only support for an HDR10 input signal. There’s no local dimming, high peak brightness, extended colour space or 10-bit colour depth support so you should ignore the talk about HDR for these models.

Another spec Acer talk about is a “1ms MPRT” which seems to have become a bit of a trend with some manufacturers, in an effort to list their screens as 1ms, even if the classification is somewhat confusing or meaningless to consumers. Where we’ve seen this MPRT (Moving Picture Response Time) spec used before has tended to be on displays which feature a blur reduction backlight, and so it’s supposed to be a reflection of how good the motion clarity is when that feature is enabled. So although the underlying panel might carry a normal G2G response time figure, the MPRT spec is used to distinguish it’s superior motion performance. However, there doesn’t appear to be any motion blur reduction backlight used on these Acer models, or mentioned in the spec pages at least, and so we’ve really got no idea where this spec stems from. We suspect “adventurous” marketing is at play in an effort to “keep up”.

The stand provides tilt and height adjustments only according to Acer’s spec page, although swivel is also mentioned on the features part of their site. We expect all 3 to be included on both models. The spec page for the XZ271U mentions only HDMI connectivity for video, and 5x USB 3.0 ports while the spec page for the XZ321QU also lists DisplayPort. It’s unclear if DP will be available on both models, but we’d be surprised if it was not. 2x DTS sound integrated speakers are also provided.

The screens are available in some regions now via Amazon. You can help support TFTCentral by using our affiliate links:

TFTCentral is a participant in the Amazon Services LLC Associates Programme, an affiliate advertising programme designed to provide a means for sites to earn advertising fees by advertising and linking to Amazon.com, Amazon.co.uk, Amazon.de, Amazon.ca and other Amazon stores worldwide. We also participate in a similar scheme for Overclockers.co.uk.