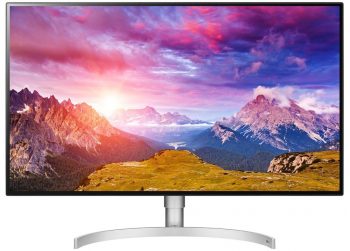 We originally published this news piece in December 2017 but there have been such long delays with the LG 32UK950 that LG have decided to revise the spec slightly, and change the model number. When released this screen will now be called the 32UL950. Our original news article is included below, including new updates and corrections to the model name.

LG have recently announced the release of their new 31.5″ size 32UL950 display with Ultra HD 3840 x 2160 resolution, their flagship consumer 4K display featuring a 4 side borderless design and signature ArcLine stand. The LG 32UL950 will use their new so-called “Nano IPS” technology. According to the LG press release “Nano IPS technology involves the application of nanometer-sized particles to the screen’s LED to absorb excess light wavelengths. This greatly enhances the intensity and purity of on-screen colours for a more accurate and life-like viewing experience.” As a result, the 32UL950 will support 98% DCI-P3 colour gamut coverage for HDR content. It’s basically a new wide gamut IPS panel, as seen recently in our review of their new 34″ 34UK950F.

The 32UL950 will also carry the VESA DisplayHDR 600 classification, as it can reach peak luminance levels of 600 cd/m2 and has the required colour gamut as mentioned above. There is no talk in the press release about it, but we are expecting some level of local dimming support from the backlight here as per other screens with this standard of HDR support. Expect to see an 8-zone local dimming backlight used here. 1.07b colour depth support is also listed in the spec delivering the required 10-bit depth requirement for the HDR 600 classification (8-bit+FRC).

There is support for hardware calibration via compatible colorimeters and the screen also carries a factory calibration. Tilt, height, swivel and rotate adjustments are offered from the stand.