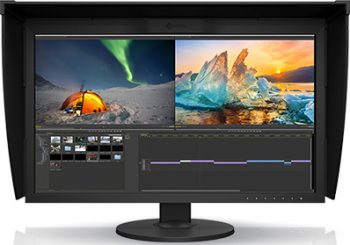 Eixzo have just announced their new 27″ ColorEdge CG279X display, the successor to the CG277.  According to the press release: “Distinguishing it from its predecessor, the ColorEdge CG279X comes equipped with HLG (hybrid log-gamma) and the PQ (perceptual quantization) curve for displaying and editing HDR (high dynamic range) video content. The optimized gamma curves render images to appear more true to how the human eye perceives the real world compared to SDR (standard dynamic range). Having a monitor equipped with HDR gamma support ensures professional creators can reliably display HDR content during the editing process so it is ready for color grading at the end of the workflow.”

While there is support for the HDR gamma curves for HDR video editing, there is no talk in the spec about any kind of local dimming or increased peak brightness, so there is no real HDR output capability from the screen as such. It does offer an extended colour space (98% DCI-P3) and 10-bit colour depth though.

The monitor features the sleek new cabinet design of the latest ColorEdge models. The monitor’s bottom bezel is approximately 46% thinner than its predecessor’s and the monitor depth was reduced by approximately 20%. A carrying handle is built-in for easily moving the monitor between locations and the stand features a quick release button which allows easy detachment from the monitor with a single touch. Electrostatic switches that light up are used in place of traditional buttons for seamless access to the monitor’s OSD menu.

The ColorEdge CG279X is equipped with an upgraded built-in calibration sensor which allows the user to continue to operate the monitor even during re-calibration. This makes adjustments at the hardware level to the screen itself, via the 16-bit 3D LUT.  The sensor swings onto the screen at a time designated by the user and takes up minimal space so work remains uninterrupted.1 The built-in sensor eliminates the need for a third-party calibration device and ensures the screen stays color-accurate.

There are a couple of other high-end features provided too. The ColorEdge CG279X is equipped with a temperature sensor for accurately measuring the temperature inside the monitor, as well as estimating the temperature of the surrounding environment. With this temperature sensing and estimation technology, the monitor adjusts in real-time so gradations, color, brightness, and other characteristics continue to be displayed accurately. Furthermore, Eizo uses AI (artificial intelligence) in the estimation algorithm of the ColorEdge CG279X so it can distinguish between various temperature changing patterns to calculate even more accurate correction. Eizo’s patented digital uniformity equalizer (DUE) technology also counterbalances the influences that a fluctuating temperature may have on color temperature and brightness for stable image display across the screen.

Spec wise the 27″ sized IPS panel offers a 2560 x 1440 resolution, 13ms G2G response time, 1300:1 static contrast ratio, 350 cd/m2 brightness, 178/178 viewing angles, 10-bit colour depth and a 98% DCI-P3 colour space coverage / 99% Adobe RGB (so extending a fair amount beyond the standard sRGB space). Interestingly the press release mentions  that “it is equipped with a retardation film which allows tones to retain their depth even when viewed from an angle” which implies that blacks should show lower levels of glow when viewed from an angle, a common issue with IPS-type panels.

The ColorEdge CG279X is the first in the ColorEdge series to be equipped with USB Type-C connectivity, which can transmit both video and data signals using a single cable. The monitor is also equipped with DVI-D, HDMI, and DisplayPort inputs. There are also 2x USB 3.0 and 2x USB 2.0 ports provided and a light shielding hood is included with the screen.

The ColorEdge CG279X will begin shipping and ColorNavigator 7 will be available for download in November, 2018. No confirmation of price yet.