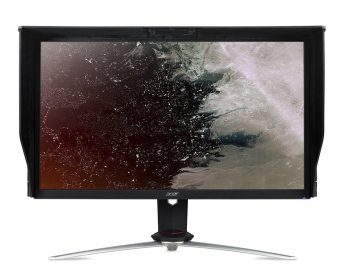 We are sure everyone will be familiar with the Acer Predator X27 and Asus ROG Swift PG27UQ (which we have reviewed in depth) displays by now. They offer bleeding edge technology including a 27″ 4K resolution IPS-type panel, 144Hz refresh rate, NVIDIA G-sync and full VESA DisplayHDR 1000 support with a 384-zone Full Array Local Dimming (FALD) backlight. They have only recently been released and carry an extremely high price tag.

Now Acer have announced an alternative and lower cost option, with similar specs but minus the FALD backlight and HDR support.

The new Predator XB273K will offer the same 27″ IPS-type panel with 3840 x 2160 (“4K”) resolution and support for 144Hz refresh rate and NVIDIA G-sync (30 – 144Hz range). They are designed for users who want high refresh rate 4K gaming, but aren’t necessarily bothered about HDR support. This new model does carry the most basic VESA DisplayHDR 400 certification but this only really means that it will accept an HDR input signal. There is no local dimming support and limited peak brightness reaching only 400 cd/m2 maximum. There is an extended colour space covering 90% DCi-P3 but this is lower than that offered by the fully-fledged HDR capable X27 model.

In other specs the 27″ IPS-type panel offers a 4ms G2G response time, 1000:1 contrast ratio, 400 cd/m2 brightness, 178/178 viewing angles. There is a full range of tilt, height, swivel and rotate adjustments offered from the stand. DisplayPort 1.4 and HDMI 2.0 connections are expected along with some USB 3.0 ports.

Release is currently scheduled for Q4 2018 although given the delays we saw with the X27 (in fact still not available in Europe properly) we wouldn’t be surprised if this slipped a bit. The initial RRP is $1299 USD ( in EMEA, starting at €1499) which is far more modest than the X27.

The Future of IPS Panels? – Is “IPS Black” Good, or Just Marketing B.S.?